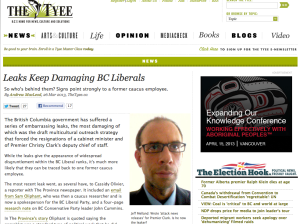 Every single day thousands of journalists, commentators, bloggers or pundits are working tirelessly to discover some new information, important data, to write THE STORY. Their aim is to author a piece which will attract public attention, bring more reader to the paper or website or watcher to TV station, listeners to the radio. Big stories are often the key element in our success on today’s rapid changing and developing media market, but still we do that with honor, pride and in bounds of our own profession. Well not all of us.

Earlier this week BC online magazine The Tyee did something so awful, shameful and disgraceful that nobody should ever go again and read them. Even if you go there be careful, unless you like to read something what’s total betrayal of  journalistic standards and professional ethics. Andrew MacLeod who’s by many regarded as one of the best political reporters in British Columbia authored an utterly disgraceful and false piece trying to guess a name of BC Liberals leak. To be honest since BC NDP came out with leaked documents regarding BC Liberals “ethnic strategy” aka “ethnicgate” we all tried to reach conclusion who’s the leak and why did it.

BUT nobody including myself didn’t sit down to pen an piece in which we discuss the names of possible leaks. Far from that nobody collected enough courage, except MacLeod and The Tyee, to put up the name and the picture of concrete person and blame leaks on it. Unfortunately this shameful duo labeled Jeff Melland as the leak putting his picture in the article, and without any hard or reliable evidence stick to his back ticket of being BC Liberal traitor to the BC NDP.

What an excellent way to destroy your own credibility, career, personal reputation and to put the black eye on your own profession! You must to be very brave or entirely stupid to accuse somebody for such action as leaking confidential information without any evidence or at least credible reason for it. On the other hand this means that even those who provide you with any off the record information or data couldn’t trust you. Unfortunately for public and journalistic profession an era is over just because an rouge author decided to play a God and destroy someones life. Every young or aspiring journalist should print McLeod’s article and keep it close as reminder how not to go through your future life as public person and someone responsible for proper public informing.