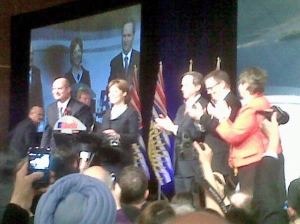 BC election campaign official start is just two week away and leading parties are gearing up. One side is changing name, other decided to use surgical tools to slice their campaign agenda into the pieces and release them in waves. Interesting strategies. Looks like BC Liberals are slowly shifting burden of current problems on “the team” instead on Premier Clark, while Dix is waiting on Liberals to make more mistakes and help him hide flaws in his campaign promises.

BC Liberals name change is not that big as Bill “Kootenay” Bennett was proposing when last leader [Campbell] was ousted but still is worth to be noticed. Since Christy Clark become leader party was branded as “Christy Clark BC Liberals”, since this weekend her name is dropped and the party is branded as “Today’s BC Liberals”.

If you run all this times under the banner of Christy Clark why change now? Well Christy Clark is highly unpopular politician, BC Premier who failed to accomplish many of her promises, and probably will be credited for the end of an era in BC politics. Shifting focus from her to the team at this point wouldn’t help BC Liberals to boost support and change fate significantly. I totally understand that Liberals are desperate to do something new or different in effort to attract more people to vote for them, but name change is just too desperate.

I’m not saying that the other party [BC NDP] is much better than Liberals because they also have some pretty strange ideas, almost impossible to be implemented over the four years. But still they’re not so desperate to start changing name just weeks before campaign start.

What they should do is to start creating new ideas, policies and programs which at the end would show to people that BC Liberals still have something to offer. At the moment majority of their actions looks like recycling of the old and non-implementable programs left from Campbell era.  Clark’s personal image at this point is highly damaged, some of her key candidates like Bell and Bond are involved in scandals, some of them are just shifted around until they found place to be dropped and acclaimed as candidates. BC voters are not stupid or deaf they clearly now what is offered to them, which party is more popular and honestly if you brand your party as the “Drunken Sailors Fun Club Party” but you have proper and benefiting agenda they’ll support you. This is not team race, this is race for the people, focus should be on programs and policies.